When UC Berkeley professor Lisa Wymore began coordinating this year’s Berkeley Dance Project in fall 2021, she assumed the annual showcase of original works would be a live performance.

It had been nearly two years since the Department of Theater, Dance and Performance Studies had presented an in-person event, and she wanted the student performers to feel the energy of sharing a stage in front of an audience.

But with the emergence of Omicron, the highly contagious COVID-19 variant, and an announcement that the campus indoor mask mandate would remain in place, Wymore had to think fast. She wanted to maintain a safe environment, while still providing students an opportunity to dance together in the same space. So, she, along with the project’s other directors, decided to transform the live event into a film.

Within days, the production and design teams had to pivot to an entirely new medium, shifting from the stage to the screen. The costumes were altered, the makeup was toned down, the lighting was adjusted, the shot lists were updated and the original music rescored. And the stage was surrounded by black curtains that made it feel more intimate, like a small sound studio.

The Berkeley Dance Project 2022 film, which includes two performances — In Search of an Outcome, directed by Wymore and Mills College adjunct professor Sheldon Smith, who lead the dance and theater company, Smith/Wymore Disappearing Acts; and Detour, directed by Daiane Lopes da Silva and Weidong Yang of Kinetech Arts — will make its big screen debut at the Berkeley Art Museum and Pacific Film Archive (BAMPFA) on April 1.

Both performances are highly collaborative and reflect the theme If Then: Explorations in Dance Choreography Within Computational Environments, which touches on the past two years of uncertainty and explores the connection we have with technology, each other and our environments.

For Lillian Bickley, a fourth-year student majoring in dance, the Berkeley Dance Project was a chance for her to dance in person with other students — something she hadn’t yet been able to do since she transferred from Santa Ana Community College to Berkeley in fall 2020.

So, when rehearsals started for Detour, the piece that Bickley was a part of, she was thrilled.

“It was the best feeling to be able to dance with other people again,” she said. “Even though we wore masks during rehearsals, I could still see other dancers’ movements, and they could see me. So much of dance is about being able to acknowledge and hold space for each other, which is a lot harder to do over Zoom.”

When students began rehearsing for Detour, which reflects on the uncertainties, fear and solitude that most of us have felt during the past two years of the pandemic, Kinetech choreographers da Silva and Yang asked students to move in the most basic ways.

“I remember Daiane saying, ‘Stop dancing. Just simplify it. Break it down to the simplest form,’” said Bickley. “And we were like, ‘But we’re dancing. What does that mean?’

At first, the dancers were told they could only walk, sit or lie down. And from these fundamental movements, a new kind of playful creativity — one that Bickley hadn’t before tapped into during her eight years of previous dance training — began to emerge in their collective performance.

“We explored a lot about energy and isolation and coming back together,” said Bickley. “We would talk about ourselves as molecules. There are places in the performance where our movements are more structured, like ice. Or more flowing, like water. And there are parts where we’re air, and we’re bouncing off each other.

“It was really an expression of the chaotic nature of our lives,” she continued. “Things are just constantly moving and being built and destroyed and rebuilt, with new ideas flowing in and out within all these transitional periods of time.”

During filming, students could remove their masks, which Wymore thought was an important option for the dancers.

“There are subtle things in a person’s face that work in the fullness of how we interpret what’s being moved in our bodies,” said Wymore. “How someone looks or how they breathe, where they place their face or eyes, the small movement of their lips.”

“When you get to see a human being in their full form, their whole selves, it’s just very different,” added Bickley. “I’m a very social person, and I missed being able to see people’s faces. It was really amazing.”

Wymore, also the faculty adviser for Berkeley Arts + Design, said she hopes this dance film is a catalyst for creating more classes across campus on how to create films that involve movement and embodiment.

The Berkeley Dance Project 2022 film, which runs about 50 minutes, will be screened for an audience at BAMPFA on April 1 from 12:30 p.m. to 2 p.m. The event is free and open to the public. Visit BAMPFA.org for details.

The film will also be available to stream from April 1 through May 15 for $5 to $20. Visit the Berkeley Dance Project webpage for details. 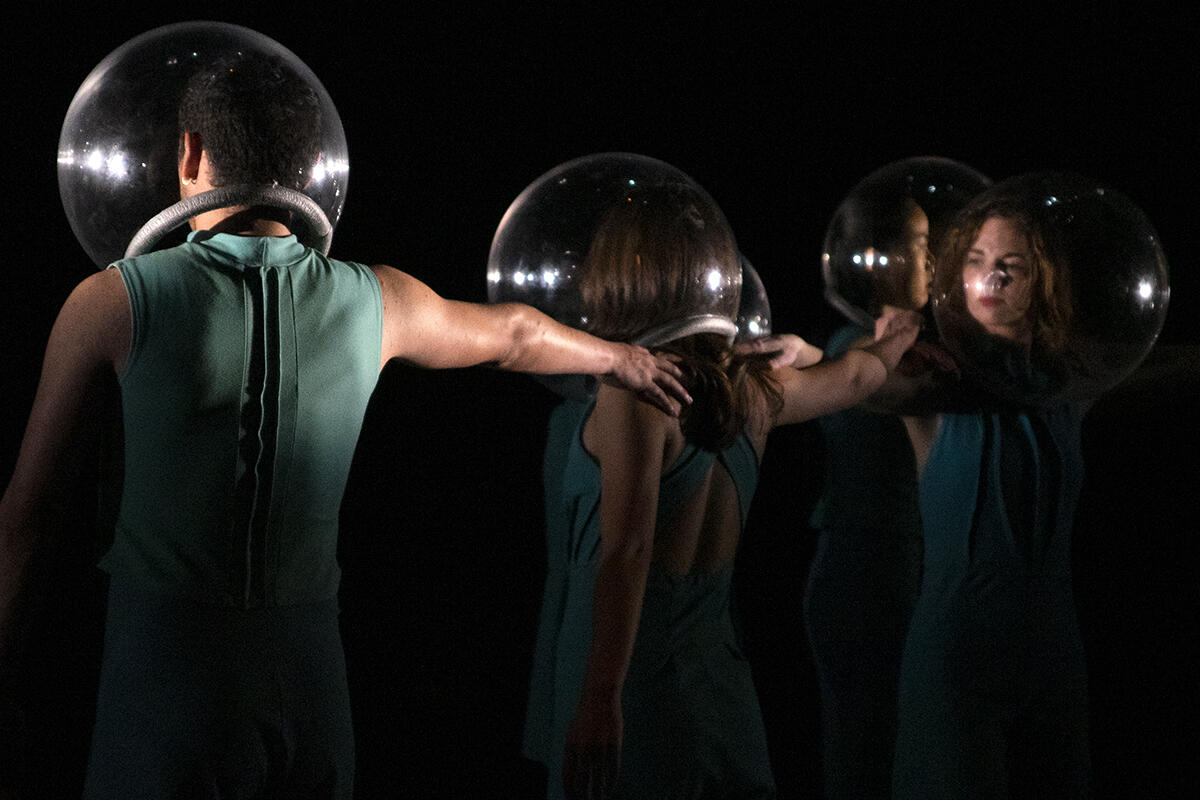