According to Prof. Peter Glazer, who is mentoring the student directors, the three plays confront the human desire to make sense of the world. Whether addressing memory, communication, or relationships, Glazer said, “the plays are about losing something that still lives in us, that doesn’t go away, and how we try to come to terms with that.”

Unlike more traditional works, Silence relegates a sense of plot to the periphery, and works to explore the characters’ interpretations and recollections of the events of their lives. “It explores the way our perception of the past can vary from person-to-person, and can even change for ourselves as we age and our view of personal experience begins to blend and reform,” said student director Benjamin Arsenault. “The play exists almost as an anthology of half-remembered things and analyzes the way we cling to our memories, trying to piece together the few fractured and fleeting moments that we retain and deem our ‘history.’”

Footfalls explores grief and loss in a deeply expressive way: the onstage actress is confined to pacing nine steps, back and forth, at the front of the stage. Slow and methodical, Footfalls presents a story that underpins a lived experience — by participating, our own stories and experiences of grief and loss may be challenged and reinforced. The woman, together with the mysterious voice she suddenly hears, allows us to reflect on the rituals we all keep to preserve the dead and the lost from falling out of our memories.

Springtime examines the values of heteronormative marriage and subverts the roles to portray what student director Gabriela Pool calls “a beautiful story between two womxn.” Fornés uses the relationship of these womxn to explore and dissect the values pledged through marriage vows, leading, as Fornés states, “the humanity [to be] not so much in the character, but in the situation.”

Patrons may purchase tickets for Beckett / Fornés / Pinter in advance on the TDPS website or at the door of Durham Studio Theater up to one hour prior to each performance.

Beckett / Fornés / Pinter opens Thursday, March 14 and continues through Sunday, March 17 at Durham Studio Theater on the UC Berkeley campus. Performances are Thursday, Friday, and Saturday at 8pm, and Saturday and Sunday at 2pm. General admission tickets are $15 online or the door; tickets for students, seniors, and UC Berkeley faculty and staff are $10 online or at the door. Tickets are on sale through the TDPS Box Office: http://tdps.berkeley.edu/events/one-acts-2019/Beckett / Fornés / Pinter features direction by TDPS students Benjamin Arsenault, Marie Shelton, and Gabriela Pool with mentorship by Prof. Peter Glazer, and stage management by Ryan Advincula with mentorship by Laxmi Kumaran. The cast includes Steve Benetier, Sofie Herbeck, and James Perkins in Silence; Brigit Comeau, Rose Escolano, and Xun Zhang in Springtime; and Carmel Suchard and Julia Reilly in Footfalls

About the Directing Mentor

Peter Glazer, TDPS Associate Professor, is mentoring the student directors for Beckett / Fornés / Pinter. Glazer holds a Ph.D. in Performance Studies from Northwestern University. He is a professional director and playwright whose plays, adaptations, collaborations and directing projects include Woody Guthrie’s American Song (Bay Area Drama Critics award, with Drama Desk and Outer Critics Circle nominations Off-Broadway and Joseph Jefferson Award winner in Chicago), O’Carolan’s Farewell to Music (Delaware Theater Co.), Michael, Margaret, Pat & Kate (Marin Theater Co., Victory Gardens Theater), Measure for Measure, Seven Lears, Murder of Crows, and Marisol (UC Berkeley), Heart of Spain and Foe (UC Berkeley and Northwestern University). He is presently co-writing a musical based on The Beggar King and the Secret of Happiness, by Berkeley storyteller Joel ben Izzy, and co-writing a new play with Celtic harp virtuoso and storyteller Patrick Ball, Come Dance With Me In Ireland: A Pilgrimage to Yeats Country. He is also adapting Karen Shepard’s historical novel The Celestials for the stage. He is a longtime member of the Stage Directors and Choreographers Society (SDC), and sits on the board of the Freight & Salvage Coffeehouse in Berkeley.

The Department of Theater, Dance, and Performance Studies teaches performance as a mode of critical inquiry, creative expression and public engagement. Through performance training and research, we create liberal arts graduates with expanded analytical, technical and imaginative capacities. As a public institution, we make diversity and inclusion a key part of our teaching, art making and public programming. 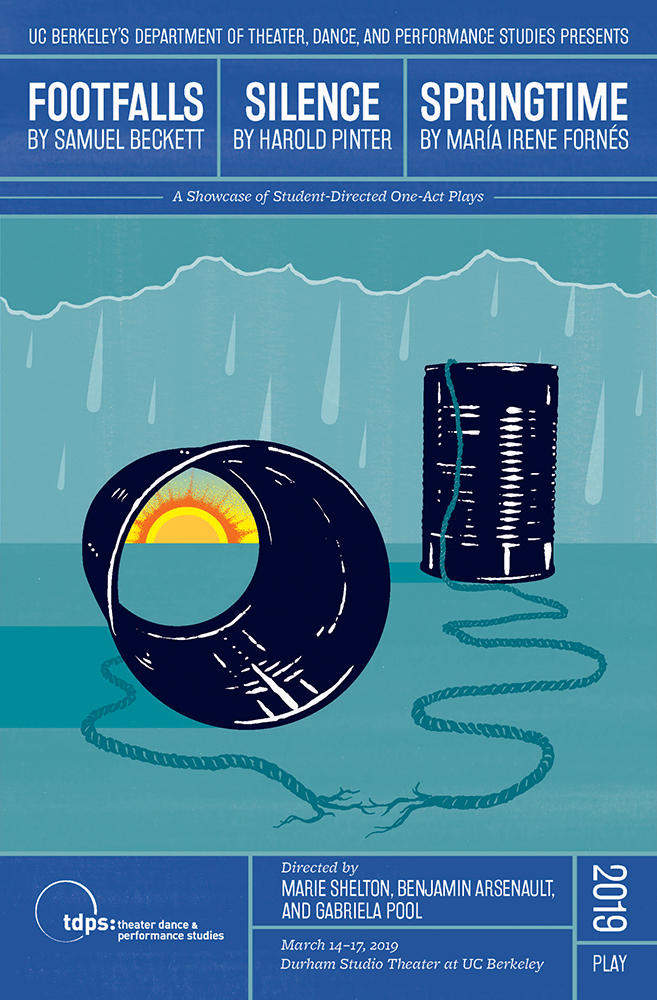