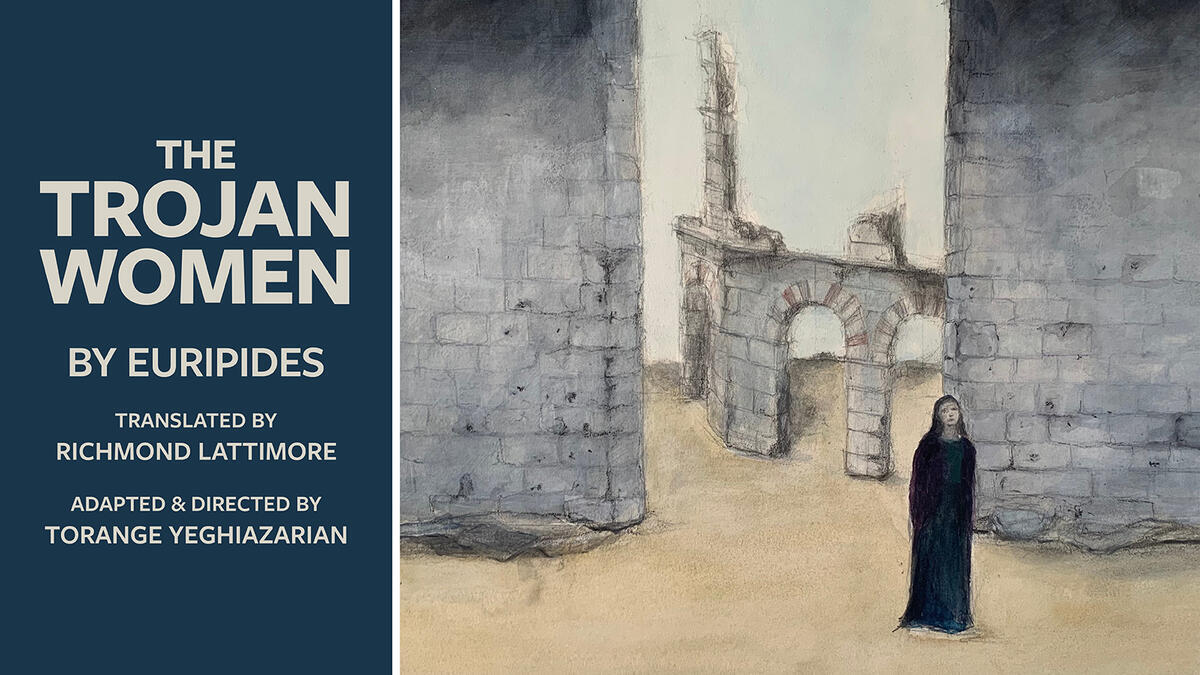 When one empire falls and another rises, who is caught in between? And how do the decisions made a century ago continue to reverberate through today’s global political dynamics? This geopolitical reframing of Euripides' timeless tragedy parallels the aftermath of the Trojan War­­­­­­—and its devastating effects on women—with the rise of the U.S. as an empire in the 20th century.

I fell in love with Classic Greek drama as a graduate student at San Francisco State University (SFSU) when our beloved professor, Camille Howard, dedicated a full semester of Literary Criticism seminar to the study of Greek Classic plays and their contemporary adaptations. There, I discovered an affinity with the performance aesthetic and literary traditions of the Greeks. Much of it felt familiar to me, possibly because of my experience of Middle Eastern traditional performance styles, including epic storytelling and ritualistic religious drama. My first production at Golden Thread Productions [1], the company I founded upon graduating from SFSU in 1996, was a contemporary adaptation of Lysistrata where Israeli and Palestinian women join in a sex strike to force men to sign a peace treaty.

I am drawn to Euripides’ Trojan Women because of its stark anti-war tone, and specifically, its unapologetic depiction of the price women are made to pay for war. Another parallel, and equally important, theme of the play is the fall of an empire and the loss of royal glory. For this production, my concept was to set the play in 1917 during the final years of the Ottoman Empire. After all, Troy is in modern day Turkey and I wanted to explore the play’s themes from a contemporary lens vis a vis the formation of the modern Middle East. In my mind, the Trojans would be the Ottomans and the Greeks would be the British; one Empire falling as the other is rising. But as the production fell within the COVID-19 remote-learning era, I chose to “stage” the play as an audio play. With this in mind, I edited the original text down to its core story and dialogue that propelled the action of the play. I cut the Gods and lengthy references to past wars and historic events. While I kept city and character names the same, I minimized references to them in order to convey a more timeless universal narrative while remaining truthful to the original.

My approach to directing the cast was to focus on the play’s universal themes and build upon the cast’s skills and life experiences. We kept the language heightened but approached the character development from a contemporary lens. We chose not to adopt an accent or pretend that our characters are Turkish or British. The voices are the voices of the cast and because we were blessed with fantastic choral singers, we improvised a lot of harmonizing and singing, some of which is underscored with Turkish Taqsim music. This is very much in line with how a Greek chorus might have performed.

Working with the scenic and costume designers, we chose to stick with the original idea of setting the play in 1917. The scenic design is inspired by Ottoman architecture and the costume design by Ottoman fashion and British uniforms of early 20th-century.

I’m grateful for the opportunity to work with UC Berkeley students and staff and wish to extend my gratitude to everyone involved, particularly Philip Kan Gotanda for recommending me. It has been a tremendously rewarding experience and I am certain you will be able to hear the full commitment of everyone involved in the recording.

[1] Golden Thread Productions is the first American theatre company devoted to plays from or about the Middle East. GoldenThread.org

Links below will open in a new browser tab. 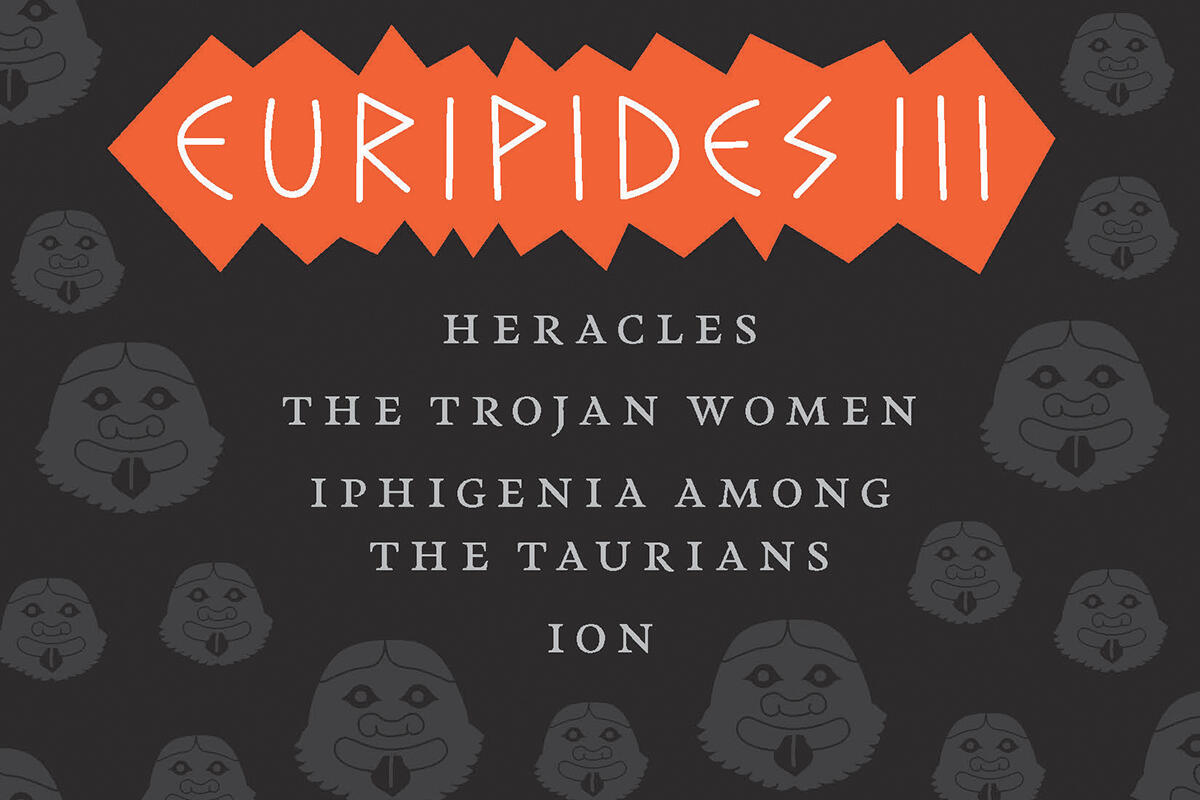 Introduction to The Trojan Women 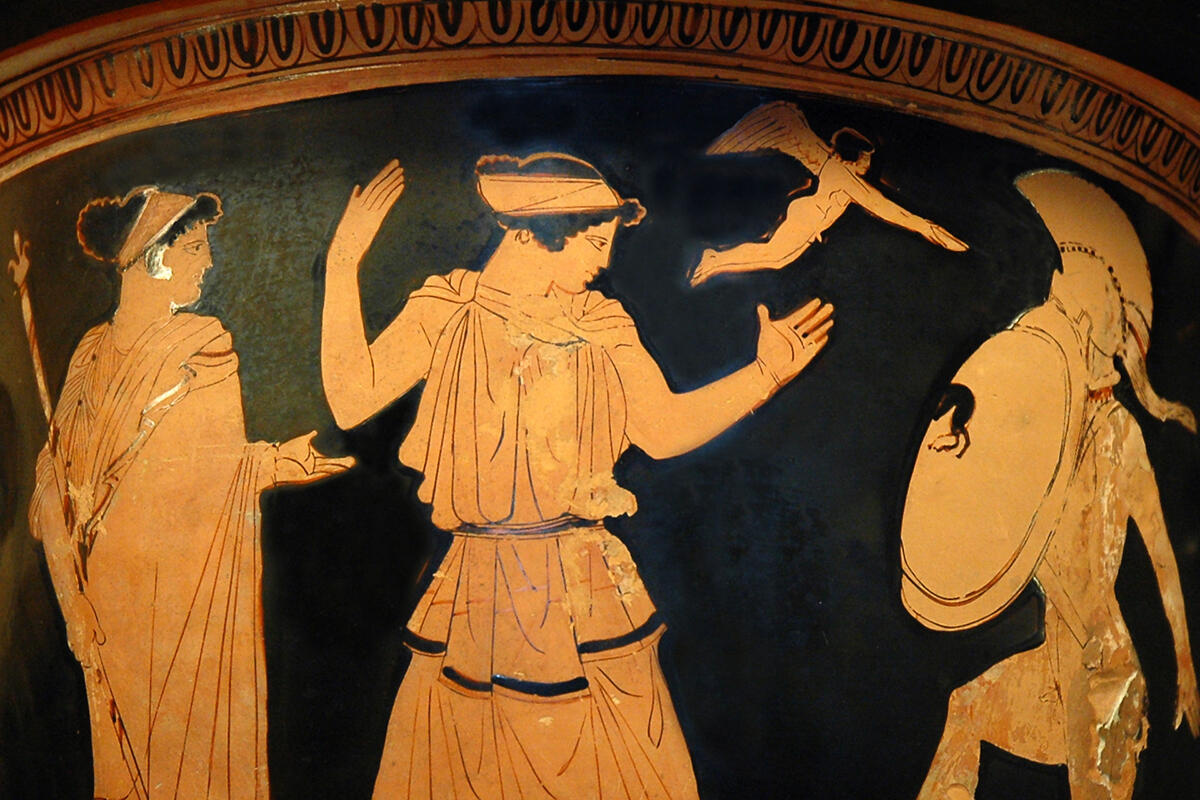 Characters of The Trojan War 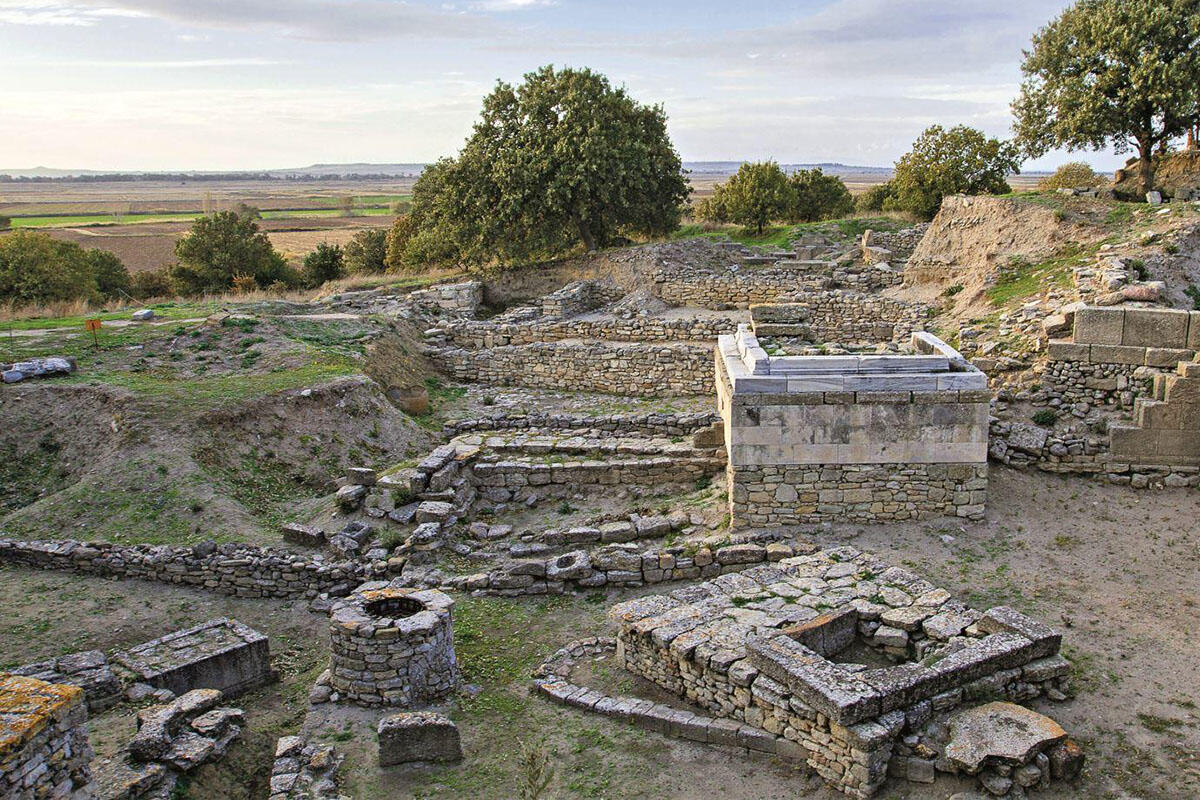 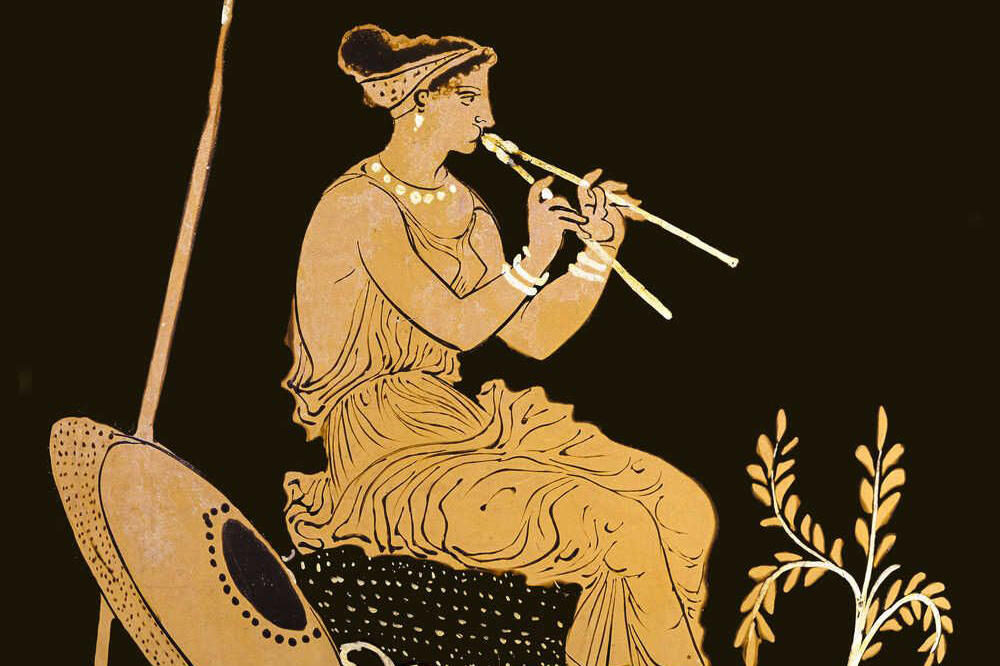 Music in The Trojan Women 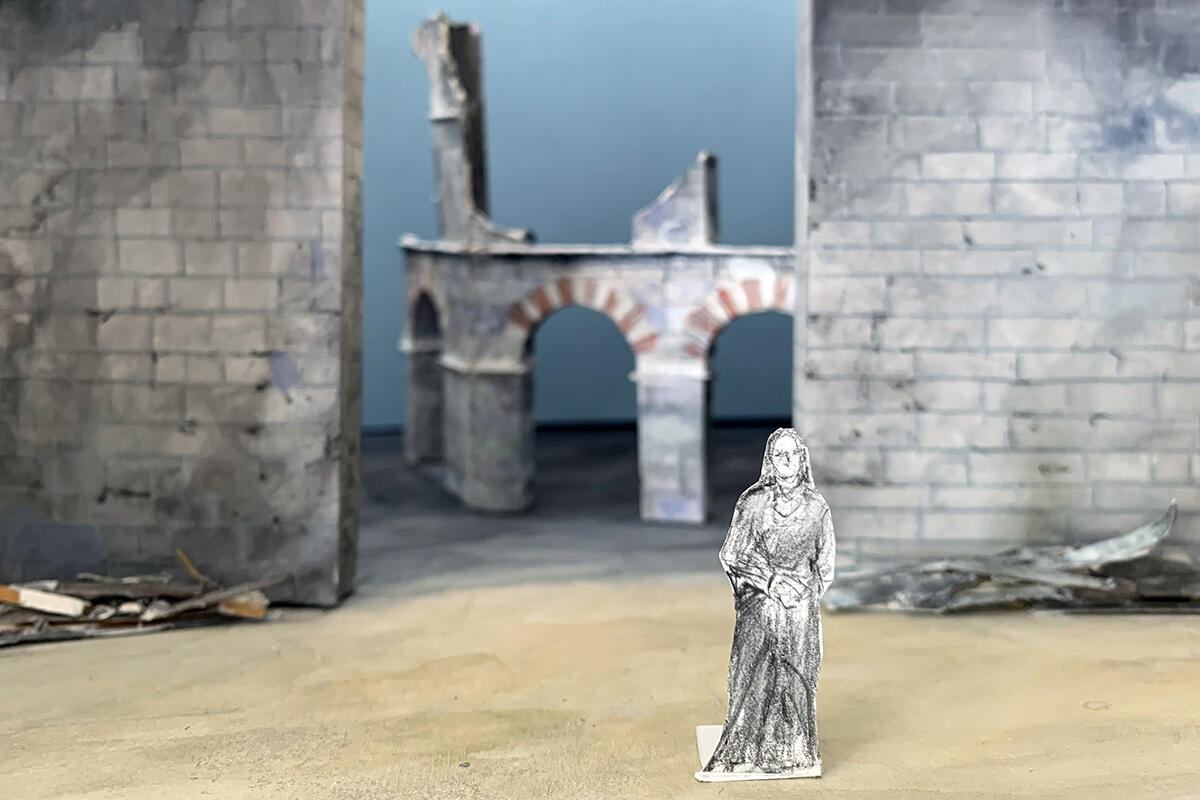 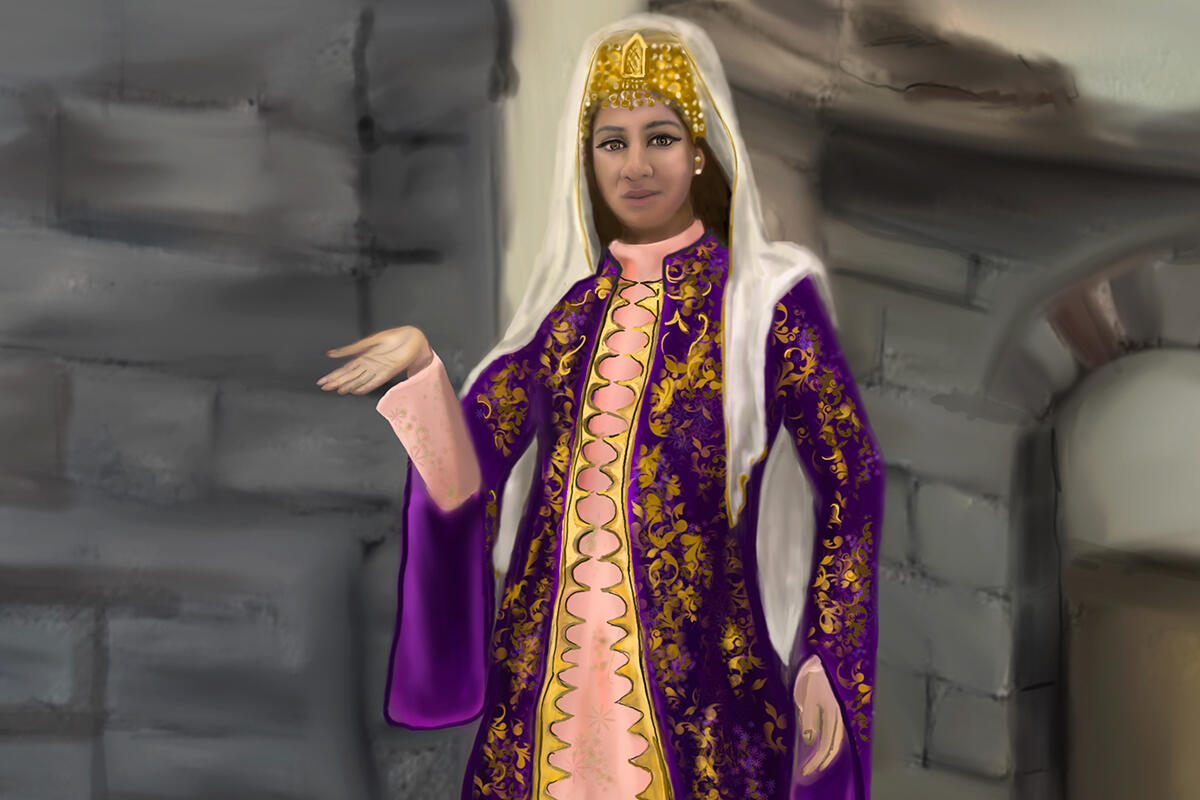 Although this production is presented in the form of an audio play, we designed the set as it would have been produced at UC Berkeley's Zellerbach Playhouse. I presented the design process to the students enrolled in the technical production and set design classes.

Torange, our director, set the play in Turkey in 1917 during the final years of the Ottoman Empire. We decided that, in our version, the story will take place at a fort by the sea instead of Dolmabahçe Palace where the Ottoman sultan resided at the time. At first, we discussed whether we should include the Trojan Horse, a vessel designed to hold 30-40 soldiers. We eventually decided to omit it, as it would easily dominate the stage. We also debated whether we could scatter remnants of the horse around the set, but realized that this would add too many elements on the stage and take away from the bleak, empty feeling we wanted to present.

In our set, there is an open space in front of massive stone gates. We extended the stage to create a more intimate space for the audience and actors. The orchestra pit is down below this area; it would suggest the sea, and the void. Behind the gates, there is two-story stone architecture with Turkish style archways. Behind, there are walls to enclose the structure. Upstage, there is a curved cyclorama suggesting the sky.

The inside of the gate would be dark. When Cassandra is running with a torch in her hand, we imagine seeing the light reflected and moving on the upstage walls and the architecture as she is frantically whirling around.

Andromache and her son Astyanax are carried on a wagon with the spoils of war. We made the wagon look simple and common instead of a carriage for aristocrats so that it would emphasize the position Andromache is in.

Our hope is that the listeners of our audio production will be able to follow our thought processes and see our vision.

Having previously read The Illiad and The Odyssey, I was gobsmacked by this play when I read it in my classics class at Cal 30 years ago. It was great and awful and sad and infuriating. It had an impact.

Torange (the director) set the play in 1917 in Turkey with the Trojans represented by the Turkish people and the Greeks portrayed by the British. This was a fascinating twist to imagine. My assistant, Ella, and I began researching photos of Turkish women and clothing of the time. Torange sent me some glorious pictures of Turkish women in splendid clothes which mixed traditional elements with a bit of 20th Century western elements. I was fascinated by this element of glamour because I knew how devastating it could look to see it broken and torn. Luxury, blood, and dirt. Visually, that’s interesting to work with.

I designed each character in their pristine clothes so Torange and I could see where they would have started. Once we got that right, I then distressed the costumes and showed them how they would actually be at the beginning of the play. We would never see these women in a clean and untorn garment. The soldiers present a bit differently. Talthybius is rumpled, disheveled and a bit bloody. Torange suggested that the men would be tired and out of sorts because they are coming out of a partying atmosphere. This is why Menelaus is perfect except for his tired and unshaven face.

Hecuba is the fallen queen, regal in purple and gold, rumpled and beltless, jewelry mostly gone. She rolls in mourning all over the ground, so I knew her costume had to get progressively worse.

Cassandra is the virgin priestess, brutally assaulted. She wears a dress and a shawl/cape which actually have a tight cuff. We see her with bracelet bells on her wrists to make musical sounds for dancing in devotion. Torange wanted the aftermath of this assault to be in our face and apparent in her clothing. She would also have dried blood on her hands and a bit on her face, along with bruising make-up.

Andromache is wearing a dress, full pants, a lace coat and a velvet blue overcoat with gold embroidery. Her scarf is blue and delicate, her hat covered in gold medallions. Although he's not pictured, we also chose a look for Andromache's son, Astyanax. Knowing his fate, I had a hard time drawing him.

Helen was a tricky one to design. Torange and I wanted her to feel more Western. I liked the idea of adding some ancient Greek accents. The white underdress has a western silhouette, but the shoulders and neck are bare showing a scandalous amount of skin. This was a way to show how the other women see her as an outsider and not a woman who has the same values and modesty as those around her. She is draped in a red toga like scarf and has jewelry and gold embroidery. She does not use a headscarf like the rest of the women. Her costume is only distressed at the hem of her dress.

The Chorus have a similar silhouette to Hecuba but lack her opulence. They are wearing pants, which are more youthful than Hecuba’s underskirt. They are all wearing half masks which cover the forehead and are devoid of expression. There are mixed patterned fabrics in the layers of clothes in muted shades of red, green, and cream.