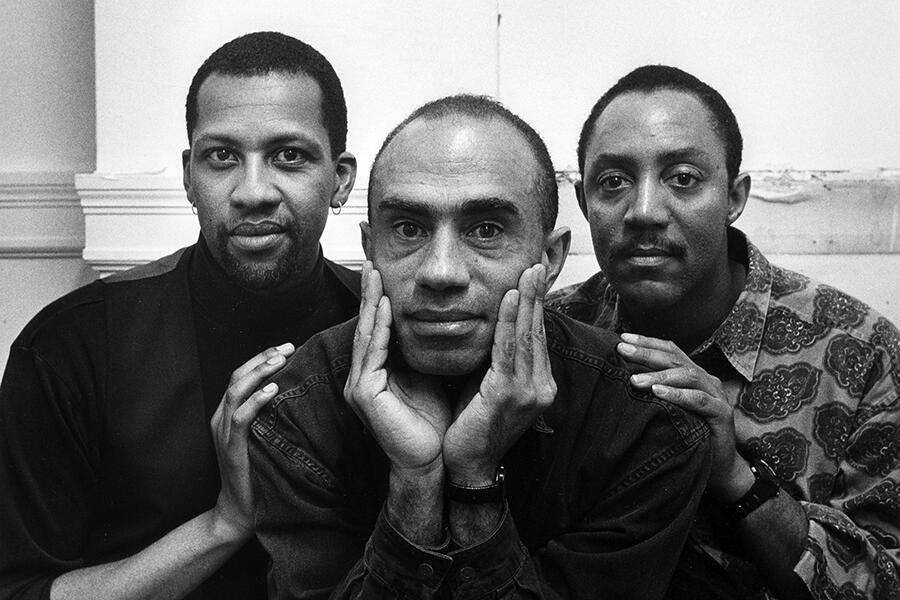 PostModern African American Homosexuals (Pomo Afro Homos) was an African-American gay identified three man performance troupe founded in San Francisco, CA in 1990 by Eric Gupton, Brian Freeman, and Djola Branner. Eric Gupton was a singer and a dancer who was born in Boston in 1960. He attended Antioch College in Ohio where he earned a Master’s degree in theater. He moved to San Francisco in 1984 where he would meet Brian Freeman. Brian Freeman was born in 1955 in Boston. He is a writer, director, and actor who was a member of the San Francisco Mime Troupe. Brian served as the Director-In-Residence at the Public Theater from 1988-89 before he founded Pomo Afro Homos. Aside from his two works with Pomo Afro Homos Brian, he has also written A Night at the Apollo, I Think It’s Gonna Work out Fine, Slight Variance, and Civil Sex. Djola Branner, whose name means “share the wealth” in Yoruba, was born in Los Angeles in 1957. Djola received his Bachelor’s from UC Santa Cruz, one Master’s Degree from the New School in Playwriting, and one from San Francisco State University in Interdisciplinary Studies.

Pomo Afro Homos only created two pieces together: Fierce Love: Stories from Black Gay Life and Dark Fruit. Each piece in some way explores the lack of representation of three-dimensional lives of Black gay men in the theater. Their work was a critical response to complicated 90’s race politics and the HIV/AIDS epidemic that was prevalent in the black community. Pomo Afro Homos toured both nationally and internationally playing in spaces such as Lincoln Center and the Public. They also managed to garner awards along the way for their work. In 1991 they were banned from the National Black Theater Festival due to the explicit content of their work and their expression of black queer identity. Ultimately, the group disbanded in 1995 at which time the members all went their separate ways. Djola moved to Minneapolis. Brian moved to New York. Eric remained in San Francisco. Occasionally, a fourth member, Marvin K. White, would act and write scenes for the group. Pomo Afro Homos never got back together as a group after 1995 but their work lives on and saw a 2012 revival called Fierce Love: Remix played by different actors. Eric Gupton passed away in 2003. He was 43 years old.